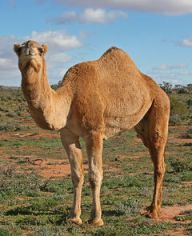 Did you know that on the Australian continent more than 1,000,000 camels roam around free in the outback? Studies have predicted that by 2018 there could be as many as 2,000,000 if no immediate countermeasures were implemented.

These something goofy-looking animal might not seem that big of a threat, but neither do most terrorists. And that is exactly what they do. They are know to terrorise outback communities.  Big herds raid townships seeking water and food. In the process, they destroy fences, taps, pumps and even toilets in the process. One might say that having a camel out back all of a sudden seems to have less to do with a person’s smoking habits.

As with all introduced species, someone at some point thought it was a good idea. And it might have been, at the time. The camel was first introduced in Australia in the 1860’s mainly living up to its ‘ship-of-the-desert reputation used for transport in the desert (prior to advent of the 4WD). Luckily for the camel Australia has a lot of desert, and I mean a lot. So much desert that 10,000 camels where introduced. And so much so, that most Aussies don’t even know that more than 1,000,000 camels live in their backyard.

To reduce the numbers of camels Australia has started exported them to countries like Saudi Arabia, United Arab Emirates and Malaysia. Also, increasingly large numbers are being culled which is always a pretty effective way to reduce numbers. Apparently, one of the benefits of this is the addition of camel lasagna to the menu in the more high-end restaurants in the Outback. However, 1,000,000 camels make a lot of lasagnas.

In history, the only truly effective way to reduce anything though is the introduction of man, people, which Australia is doing quite well as well to grow as a regional and economic power. Again, someone at some point thought it was a good idea. And it might have been, at the time.